Like a few other hams around these parts, I have more equipment than I know what to do with, plus a desire to have some gentle adventures in parts of the province I don’t get to see very often ().  When the MCC idea was hatched, I decided it would be a fun challenge to put together a rover operation and see if I could find a couple of county lines to sit on.

The Antenna and Equipment choices:

Looking at the mobile needs means choosing an antenna that can do one of two things:’

2) Give up mobile operating and erect something with more radiating element length.

I chose 2) and did some propagation and NEC2 modelling to get a decent signal on 20 and 40M (the work horse bands) and maybe 80M if possible. If 40M works, 15M is likely in the cards as well.  So, a vertical or a dipole of some sort. Vertical would be easy to make but would put a hole above you that could make it a little more difficult to work the Maritime participants.  Plus, VE1NB seems to have a lock on hot verticals around here, and the dipole at 36 feet (have some poles for that height) and in inverted V formation  showed decent gains  in the optimum radiation zone, allowed some cloud warming to contribute to the “Intercom” mode. (Intercom = NVIS)

To cut the length of this puppy down, I decided to build a trap dipole. …. (pause).. I have been reminded that I HATE trap dipoles, and generally recommend avoiding these things as grief instigators. BUT… it  seems like a trap antenna would fill the bill here and allow a reasonable length for the whole antenna. And it did ! I did up a 40M and 80M coax type trap  and after a bunch of modelling and pruning, got the length of the thing down to 49 feet per side, 98 feet over all. Plus, it was pruned to work OK as a compromise between a flat top and an inverted V. 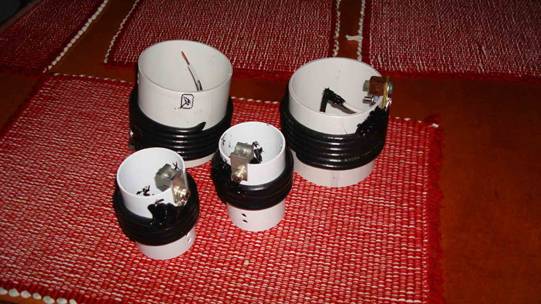 Experimenting was   performed in my back yard with a push up fibreglass pole supporting the center at 35 feet , 50 feet of coax, a decent balun at the feed point and an AIM4170 for analysis. Here are the three scans after an afternoon of  pruning and making adjustments.

The red line is the SWR. If you look in the area of the target CW portio of the band, you can see the SWR, reactance, etc. 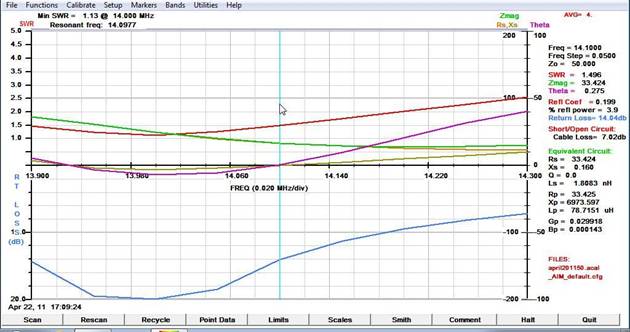 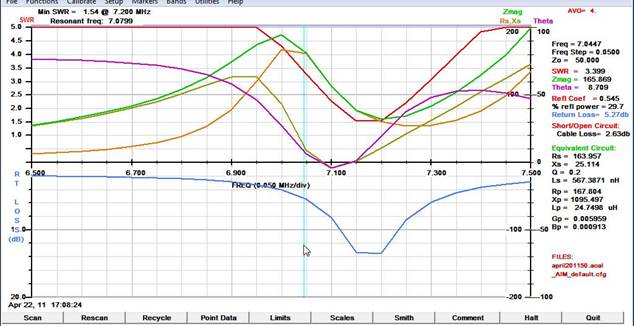 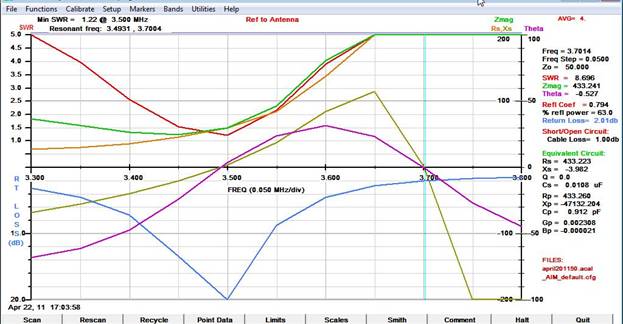 And, the antenna “Range”. Note.. we originally were going to outfit one of Ron’s collection of VW vans, but getting one in good operating order in time wasn’t going to happen, so we wound up using my 4-Runner. A bracket for the pole was made that ty-wrapped to the roof racks and put the pole on the aft-starboard quarter of the 4-Runner. 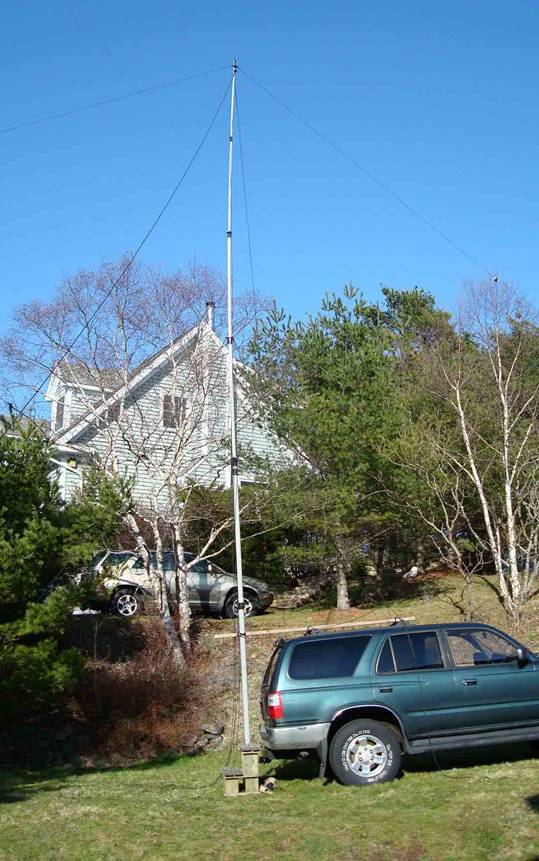 Inside, we decided the front seats were the most comfortable, and we fashioned up a little removable “Desk” that allowed the rig, computer ( a netbook) , scratch pad and paddles to sit within reach. Ron never did get the  desk in or out of the truck … it only just fit in one particular way. Only CW operators can do this stunt , it appears!  The K3 sat on the little shelf above. ( Note the shielded USB cable .. I found that cable radiated a lot of hash. The shielding cured the problem) 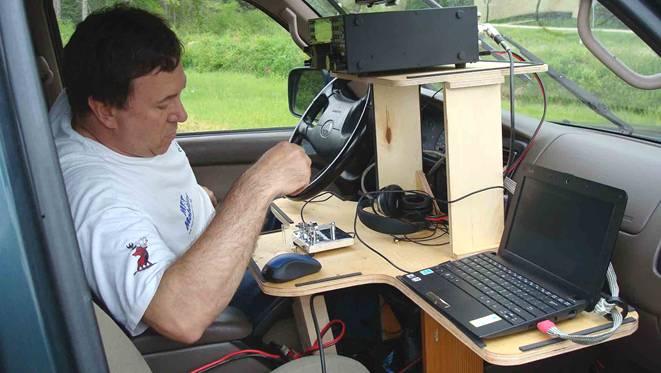 Need to lower that radio shelf for next time.

This is the gratuitous K3 promotion picture 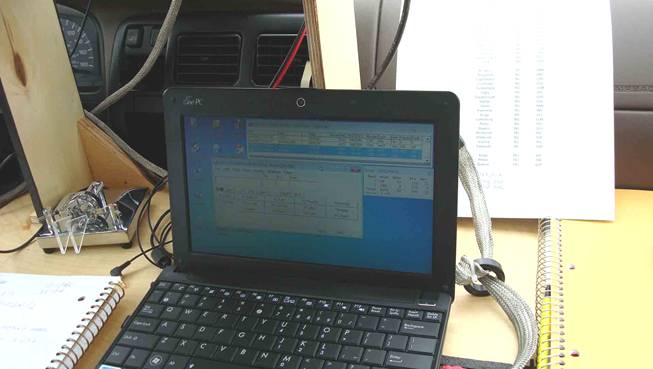 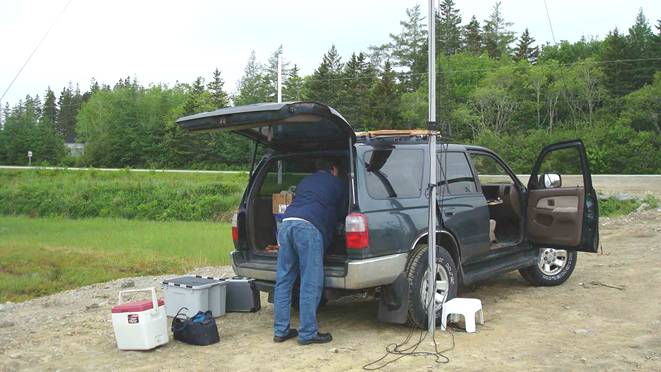 The above picture shows the plywood bracket fixed to the roof racks. This worked very well. We extended the mast on the ground and pushed it up into the bracket.

We used a nice new deep cycle battery for the K3, but also had a spare power line that came right from the truck battery , if needed. It was there already for a VHF rig, so I figured I might as well make use of it.. Also took a small Honda EX350 for charging or running the rig direct, but  didn’t need it. I would leave that home next time. The laptop was powered by a small cigarette plug inverter from the truck. That worked very well, and was quiet to boot. In fact, the only noise problems we had all day were the expensive “Noise Cancelling” BOSE headphones.. they picked up inverter hash like crazy, and regular headphones didn’t . Go figure. Some irony there.

We also had a complete spare rig in a foam lined attaché  case, and a spare laptop loaded with N1MM software and ready to go. We didn’t use them, but I would still take them along next time. Stuff happens. I carried the K3 and my “HID” devices ( paddles, headphones, the Heil contraption) around in a couple of foam filled attaché cases from Canada Tire. At $24, those things are a real bargain for this kind of thing.

I took extra antenna poles (I have 3 of them) but it turned out the best way to setup the antenna ends was to shoot a line into trees or any other object around  with a slingshot/fish reel device. Worked great and was quick. We started off with a halyard on the top of the main pole but found it just about impossible to hoist up the antenna without causing extreme scoliosis of the mast. We gave that up and  attached the center point of the antenna before standing the pole up. The first setup took 1 ½ hours, the last 15 minutes.

I used Google Earth and Google Street View to locate three reachable county lines for six counties. These are amazing tools ! The first site was a property in . On our recce drive, we recognized the place immediately. The property owner, Brinley White was very gracious in allowing us use. His dad dropped by for a visit Saturday morning with Jasper, his golden retriever, who was an immediate hit with Ron and great folks ! The White’s are in the logging business in the SW of the province. 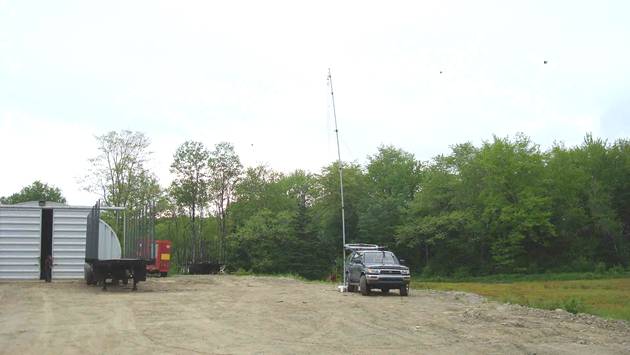 The second site was at , near Port Joli. Great site with a nice clear area and trees at just the right spot for the antenna ends. All kinds of people pulled in here to see what we were doing ! We never expected to see a soul. There were woodpeckers in the woods around us, and a flicker woodpecker even  gave himself a dust bath on the ground right in front of our truck. 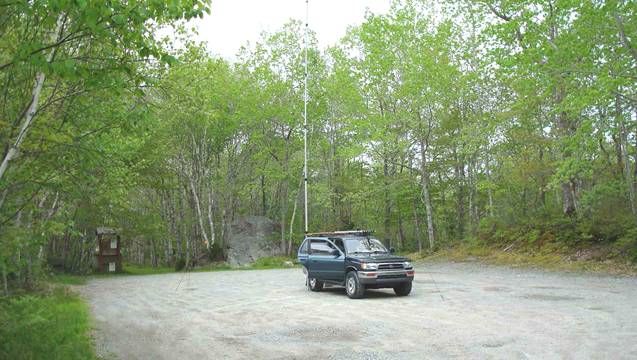 Hubbards had a great site in the parking lot of the PharmaSave. The store was shut when we arrived at , so we had the whole place to ourselves. Despite being surrounded by kids and people all evening, not one person ventured over to see what the whacknuts with the wires and poles were doing in the parking lot. 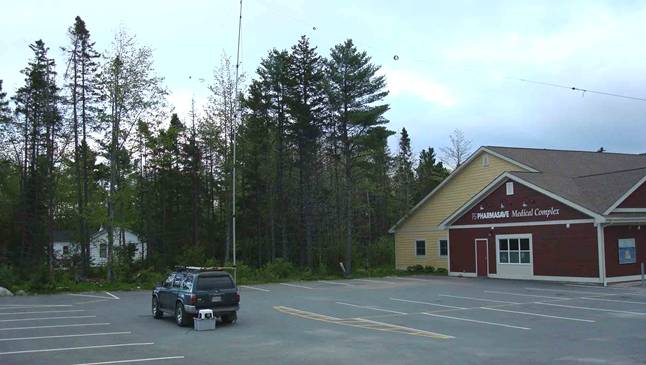 Stuff that worked as planned:

The trap dipole was great. The K3 worked fabulously. The power was no problem. The site recce trip the week before was completely worth it. Supplies were more than adequate. Scotch and cigars were voted best equipment by Ron. ( Hey, I agreed) Bugs were totally manageable by OFF spray and an OFF bug lantern. N1MM was great, except my last minute upgrade, urged on by VE1NB blew away my carefully modified section files that showed my dual counties. No big deal. It did, however, startle us by popping 100 points in the log each time we worked VA1MCC!  (Thanks Tony)

We saw all kinds of the back parts of Digby and county that we had never seen before. Gorgeous place. A host of rivers and lakes begging to be fished. We even visited the famed water filtration plant.. 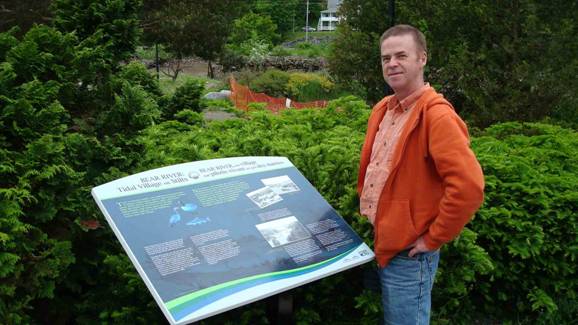 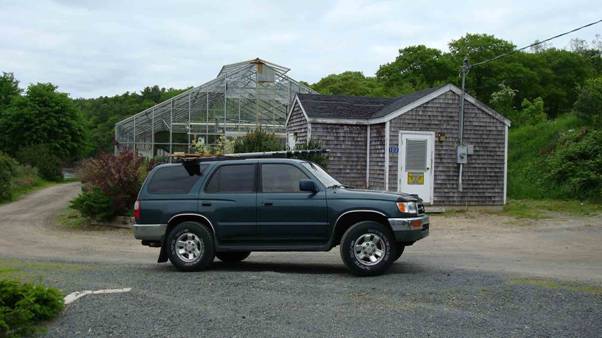 Believe it or not, the Bear River water treatment plant is a popular destination ! It is totally functional by utilizing certain types of plants.

We didn’t  relish driving 3 ½ hours to the first site Saturday morning and then operating all day, so we went down to Digby Friday night and stayed in a motel. We decided to lighten the load in the truck for the next day by consuming some Glenlivet and  some Habanos "Romeo es Julietta" No. 2’s. Worked real well. As you can see.

(Zoom in to see scotch and cigar...oops)

Not much open in Digby at 6AM on Saturday mornings, except a Tim Hortons. We noticed a couple of senior folks parked in a corner. 6 AM !  I pointed out to Ron that it could be us in a few years ! Ron objected. So we sat around for an hour gabbing , and drinking coffee, at , just like the other guys. Point made.

The first pole rigging was a mini-Titanic experience. We fixed that quick. A power cable that had been tested prior to leaving, crapped out at the first site. Luckily, moving the power battery to the passenger floor solved the problem. Too much gear.. well, you need to consider what you really need to stay operating. I would take the spare radio and computer again.

Too many moves. We underestimated our driving and lost time for operating. Next time, I think we will do two sites and 4 counties. Definitely need more operating time.

6m. It never occurred to me to be able to operate on 6M. It would be easy to whip up a 6M J pole from ladder line that could hand from the center pole. We will take one next time. Or maybe convert the dipole to function on 6 M.. working on that now.

SSB wasn’t a big success, but that is likely because  I am not much of an SSB guy, and it never occurred to me to move some ops up to SSB for additional mults. D’oah ! Next time. VE1RGB would be proud of me, I had purchased a new fangled Heil head set and foot switch with a K3 adapter for just this purpose !

N1MM has a little glitch too. Some DX contacts, like ON5XX ( e.g.) would only accept an exchange of ON. Same as . This is something that VE1NB will have to watch on score checking.

This isn’t scored by VE1NB yet, so this is our take from N1MM

The big gains were made by dual county scoring and by running across VA1MCC and VE9MCC.

All in all, great fun and we will be back next year.