Some “Months” back, I thought it would be fun to dig out some junk box parts and show my son how “Easy” it would be to knock together a really simple CW tube transmitter.  I admit, I was taken by the “WD8DAS Two-Tube Tuna Tin Transmitter” that was published in QST. Zac and I decided it should be similar and crystal controlled.

But then… I started to think, why not jazz this thing up a little ? Why not indeed ! A couple of bands would be good. QRP action, let’s do 80 and 40 M . What the heck toss in 30M and 20M too, as it is only a tank circuit we are talking about. Band switching, sure, easy.  ? I had one and it was the wrong freq for any  real contacts, so I did order some FT243 fundamentals from a fellow in Florida who has a basement full of old holders and will cut crystals for you.

More features ? You bet !  Power supply on the chassis. Yup. I have lots of 5763’s, so why not parallel up the PA stage for more power ? Sure thing. A “Rubber” control. Spot switch. A meter to see PA mA. A T/R relay. An isolated cathode keying circuit for safety. Maybe a regulated B+ for the oscillator. A semi break in control. Oooooh… I even found a couple of unused vernier drives. A receiver antenna output. Yes, yes , YES !

(……………You see, this how engineers get themselves in trouble. Feature creep.)

Well, with the exception of the crystals, the junk box did indeed produce all the gubbins needed to start. And start we did.

Problem number 1 was innocent enough. The only thing even close to a chassis I had around was a heavy steel box. It was just too heavy to be considered simple chassis work, so it quickly became a machine  shop project. I needed  the vertical mill to whack holes in the beast. I lost Zac about this point. No problem, I thought, I will just get this chassis done and painted and then Zac and I could recreate that mythical Heathkit experience as father and son spend pleasant hours soldering parts into the chassis and operate the thing on the air.  ( I really should have sobered up at this point and bailed out, in hindsight) 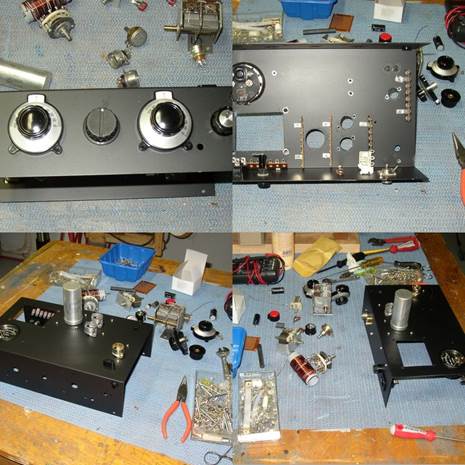 So far, so good. I managed to keep Zac interested for about 20 minutes. He normally likes soldering parts to circuit boards, but this was far more difficult and demanding. Lost Zac for the second time at this point and I gamely soldered on. I finally got the basic stuff together. I started out with the 6C4 oscillator and would use the 5763’s as a parallel PA stage. (I calculated the tank impedance to match two 5763’s in parallel.)

Problem number 2:  I didn’t have the right power transformer. I have lots of old salvaged power transformers but they all produced way too much voltage on the secondary. I wound up spending oodles of hours  screwing around with this  issue, trying up to  half a dozen different arrangements to get to the needed 250 V DC B+,  6 VAC for the heaters and 12 V for that non tube feature list that I had decided to throw in ! The dagnabbed ^&%$^%#%$#%$#%^$$ power transformer was finally working. Time spent so far: 17 hours.   Yikes !

OK, it’s all together. NOW I can get to the rush of operating my new tube rig !  Ummm, well, not quite yet.

Problem number 3 rears it’s head. The 6C4 works OK but droops like crazy. Man, I turned a receiver on to listen to the oscillator while keying the unit. I couldn’t put that on the air. It was awful. It might be something you could use to extract confessions , but it sure wasn’t going to contribute to a QSO. Now I decided that what I really needed was a high voltage regulator in the thing. I have lots of tube regulators but it would involve drilling another hole in that hateful nuclear bomb proof chassis. I decided to “Cheat” and slip a power NMOS fet shunt regulator inside where nobody could see it. After all, I did use a couple of NMOS fets to do the cathode keying to keep lethal voltages off the key contacts. Nobody would ever know. Right ? Another 12 hours rolls by. New total : 29 hours.

Problem number 4 hoves over the horizon. I can’t get more than about 12 V RMS across the 50 ohm dummy load with the bleeping thing. This equates to about 3 watts RMS out. Wow, after all that, and it weighs about 15 lbs at this point. 5 lbs. per watt. A marvel of modern materials and methods. At this point, I pretty much abandon my dream of the cute little two tube rig, and realize I have entered the world of BA’s. ( Boat anchors, if you haven’t heard that term before)

I decide to get this thing on the air and manage to coax Gary VE1RGB and Dick VE1AI into an 80 M QSO. That goes OK. All the way across town too ! Wow.

Just to prove that as you get older, your memory fails more often, I decided this week to have another go at my albatross, er, I mean tube project. Digging out my tube references and working through the load lines for the 5763’s, I decide that my problem may be the 6C4. It’s not up to the drive job needed to drive the two 5763’s.  What I need is a beefier oscillator. I decided to use another 5763. That entails a rethink of the whole thing. The original circuit coupled the oscillator to the PA with no tank or filter. That isn’t really good practice, so I decide to add another small tuned peaking filter for the oscillator.

Problem number 5: there is no more room under this pig for another coil and variable capacitor. Only one thing left to do… add a carbuncle on top and yet another knob to twiddle with on the front panel. It’s getting heavier !

While I am at it, I try and remove some of the now surplus junk and just generally bad ideas. The verniers were a complete waste of time. I got rid of one. The “Stealth HV regulator” was no longer needed, so out it went.

The new oscillator works fine. And, my new output power is : slightly better than before. I might be able to claim a whopping 6 or 7 watts on some bands. A pile up buster it isn’t.

No more changes for now. It’s time to work a few brave souls and put some operating time on this thing.

Time on this last phase: 12 hours. New total 41 hours. Almost a work week.  Was it worth it ?  I will have to think about that. Total father and son Heathkit time: about 60 minutes. 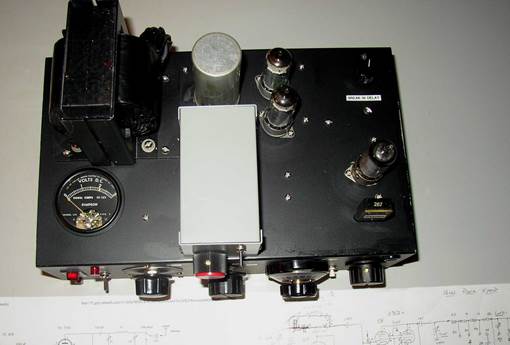 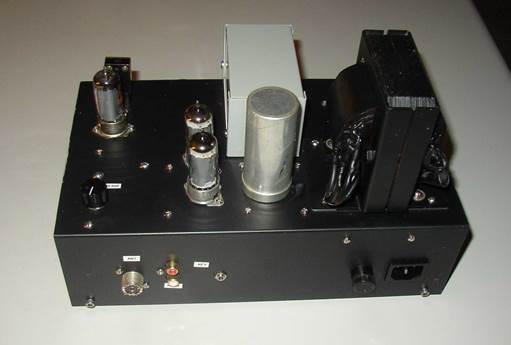 Another change was in order. I noticed during operation that the little RF chokes I was using for the plate circuits were getting VERY warm. How do I know this ?  Smoke and plastic were being ejected from the things in a long key down test. Oooops. I found an old ceramic coil form and wound a proper choke with some heavier wire.  Here is a picture of the guts: (which I am somewhat reluctant to show) 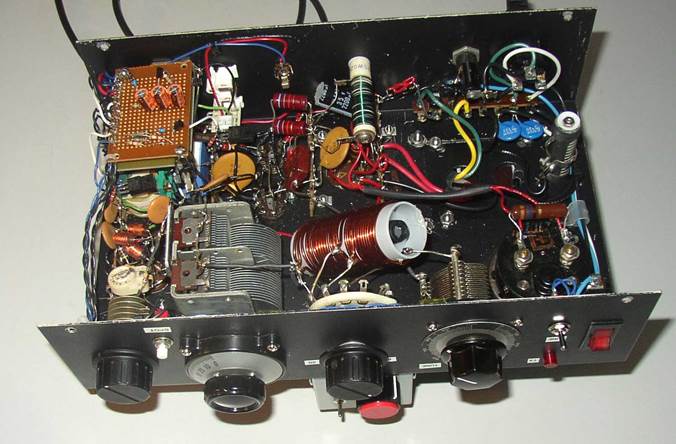 It’s a bit of a mess. This is the problem with a live “breadboard” project that you keep changing. They all turn into a mess. You can see the new PA plate choke, the green wire wound on the ceramic form on the rear. Also you can see the end of a piece of ferrite bar I stuck in the tank coil to provide a little “Fine tuning” to the coil. Lower left corner is the oscillator, above that is the relay and cathode keying and break in circuit. To the right of that are the PA’s, then the transformer. Back to the lower right corner is the PA mA meter, and then the tank consisting of the two capacitors and switched coil assembly.

My Autek inline power meter tells me this thing delivers a solid 4 to 5 watts on 80,40 and 30M. 20M is less , but the oscillator isn’t real stable on 20 anyway, so I probably will just give up on that band. The other three are operating OK. The freq is a bit unstable but I have had QSO’s on the  bottom three bands on the QRP part of the bands and nobody screamed at me. It’s useable. It sure makes you realize how spoiled we are with our new transceivers though.

Here is my crystal stash. I have two “Rocks” for each band and I can “Rubber” the frequency a little on either side of these. 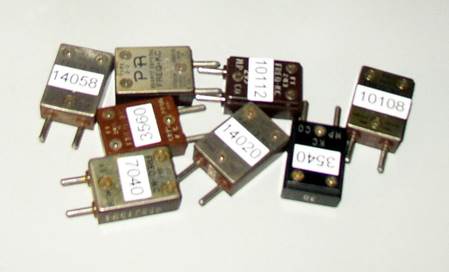 If anybody wants to try a QSO while I use this thing, send an email and we will set up a sked.

I tried the rig out this afternoon on 40 and 30. First contact on 40 was with a fellow in NY who said my 4 watts was a very good signal on the band and we gave each other a 599. The 30 M contact was a CQ with 3 watts, and who comes back  to me but a 13 year old ham in who had just completed a 1 watt homebrew rig !  It is a blast to make contacts like this with a homebrew rig, a “Glowbug” in this case.

If you decide to have a go at a “glowbug” project like this, be advised that most of these tube circuits have need of a B+ power supply of over 150 VDC and currents sufficient to kill you, if you elect to do something foolish. If you are unfamiliar with higher voltage power supplies and circuitry like this, get a little coaching from somebody who knows what they are doing first. And, of course, be careful with kids and pets hanging around while you have stuff exposed. Begillions of people have worked on stuff like this, so don’t get all freaked out about high voltages, just put your high voltage safety hat on !

It’s fun to re-read some of these stories and laugh at the decisions one makes during the “History” of a project. Remember the removal of the useless vernier and the HV power supply ?  They’re back !  I had another go at fine tuning the rig and have it working on all 4 bands now. It can do 7 or 8 watts on 80 and 40 and 5 watts on 30 and 20M now. The tuning is kind of fussy, so the verniers are useful after all. Plus, one can make a little chart of the settings for rapid setup. The droopy oscillator was finally solved by leaving the oscillator running all the time. Problem with that is the receiver staying locked onto that signal even while you are trying to listen. I solved that problem by turning the oscillator on with the T/R relay and leaving it on during a burst of dits and dahs. It goes off during the listen periods. It’s a bit unusual to operate with this but it works fine and the operator on the other end will be appreciative of a steadier tone on their receiver. ( I hope).

It’s easier to build a simple transmitter from solid state devices, and it will probably work better.

Tube rigs are big and heavy!

They do indeed glow and get warm. ( A nice wintertime feature)

Full or semi break in with a simple tube rig is rather problematic. It would be a lot simpler to use a manual T/R switch, which would also take care of all the other issues like droop and stability.

Multi band features add a of complication to a tube transmitter like this. A one bander would need almost none of the controls  used in this project and could be “Tweaked” once and ignored thereafter. Tweaking this thing up for each band is a bit of a procedure.

One does indeed feel a connection with the earlier days of radio when you make an attempt to get a tube circuit running.