Those who know me realize that I am not often tempted to leave well enough alone. This vertical  parasitic beam project is no different. I have been playing with the 40M  director version ( MK1) for a few nights and it is indeed a neat DX antenna.  I like this vertical for Euro, and .. it seems to be the ticket at my crappy city QTH. I also have two windoms ( at cross angles , an inverted L for 160 and a 2 element Stepir yagi at less than ideal height. This vertical has been  a surprisingly good 40M and 30M DX antenna, it turns out. It is a single  aluminum mast about 32 feet high with a hodge podge of half baked radials thrown on the ground and a dedicated matching device at the base to make this thing work on 80,40 and 30. There is a little switching system in there to allow remote switching from the shack with the same feedline. All three bands do not require match adjustment ( Tuning, for those of you who insist on using that term !) in the shack. That is, the work was done at the base to make the antenna work on the three bands correctly. Note that the pole by itself is fine on 40M but is too long on 30M. So, a matching network is used on that band.

Performance of the vertical is good !

Now…. I am dreaming away while playing with the rig last night on 40M and I think “…. Geeez… I should have the same sort of advantage with this antenna to the NE on 30M too “  . Yeah, hmmmmmm, how would I do that ?  EZNEC to the rescue again !

2)     Use the same director but make it work on two bands with a trap.

3)     Add another director inside the first one

The trap idea isn’t too bad but I start with 1) as it is a “Clean slate”.  (Model wise.)  What I quickly realize is that I can’t make the antenna develop the same nice beam pattern as I did on 40, no matter what I do with the geometry of the director. Why ? Well,  this antenna is no longer a simple ¼ wave element on 30M. It is too long and has a different current distribution on it.  The parasite element isn’t going to be the same as the case with a true ¼ wave element, it seems. It will work though, but has very different dimensions than the 40M unit.  There goes any hope of using a trapped element, so 2) is out.  I don’t want to keep going in and out to the antenna to change elements while operating ( Waaaay to lazy for that) so 1) is out.   Can I put the two elements in the same plane ?  Let’s try it on the model… kind of works but danged cranky. I don ‘t like it.

Were down to 4)  How about an element on the other side of the antenna as a reflector ?  Ah hah… that works OK it turn out. And real easy to put up as you can still haul it up with one halyard at a fixed point on the top support line ( top fish line, in this case).

Here is the model: 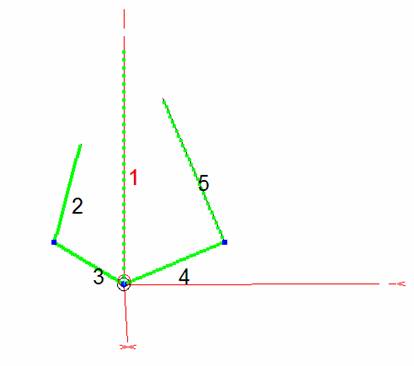 Here is the same model with 30M currents: 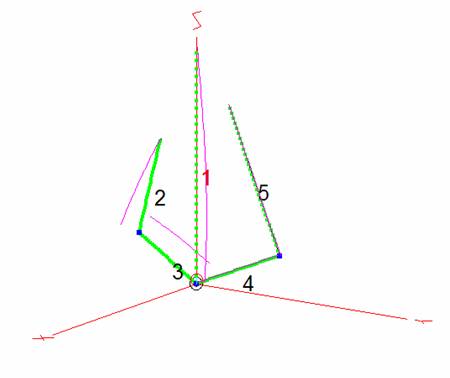 You can see that the right hand 40M director elements aren’t doing much in the pattern. That’s good !

Here is the 40M currents: 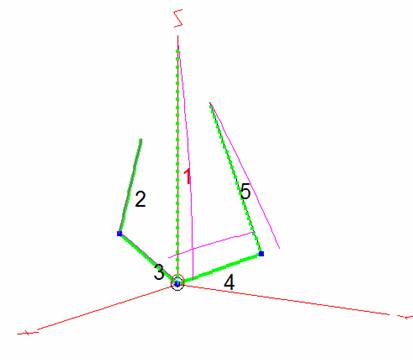 Looks good !  I strung this one up in a jiffy and sampled the impedance at the base. Sure enough, looks like my 4:1 UNUN is going to carry on and make a nice match to the coax for me, on both bands. I had to tweak the series capacitor in the 30M matching circuit, but that is all.   I also found my new 40M bottom leg was about 9” too short. That was easy to fix as well.

I probably should do another one of sketches, and I will get to it. Thing is though, if you are going to apply this technique to your antenna.. you really should model the thing first and play with the elements. What I have shown here very likely WON’T work on your antenna, unless you have a similar simple 32 foot , 1” diameter, aluminum monopole over the same kind of crappy ground.

Operating:  This evening I am listening to the DX on 30 and 40 and whaddya know ? This thing is my best listening antenna now for signals to the NE. ( , , , ). I can tell that I can knock down station to the SW by switching to the windoms and comparing. The vertical of course is inherently low angle so that is a big thing, but even distant station to the SW are down a few S unit. Very good.

Now for some operating to see how it compares.

There will be a part 3 to include a sketch and some performance reports.  Stay tuned !