Lots of folks have expressed interest in my home shop facilities. This seems to be a popular request to all kinds of hams that build things, make measurements and write about it. So, this article will deal with a few of my favourite gadgets used for evaluating RF and other electronic equipment. I admit my shops are reasonably well equipped, but not anywhere near the level of some.

Almost all of my test gear is used and or dumpster recoveries. Some of the gear is home made, and much of the accessory equipment is definitely home made.

I do have a couple of “Store bought” items that I wouldn’t be without. One is a Fluke Model 97 Scopemeter, and the other is a Fluke Model 177 True RMS multimeter. The scopemeter is a digital measurement system that can store to 50 MHz and do math. The True RMS voltmeter provides high reliability basic measurements. Both of these instruments are sent out for professional calibrations, occasionally, so that I can have some confidence in the basic measurements. In an advanced amateur course that I ran some time back, I asked all the participants to bring in their multimeters and we made a series of measurements on some simple things like a D cell. The resulting range of readings were a real eye opener !

EBay is the market place for used lab equipment. A device that sold for $10k in the 80’s can often be had for $500 on EBay. The big caveat here is that you should never, ever consider buying something that doesn’t have a complete service manual, or at least insure that one is available BEFORE buying! Next, almost no EBay seller can provide any sort of guarantee that the equipment works, so you should fully plan on repairing and calibrating equipment purchased this way. I tend to favour HP equipment because manuals are readily available, and I am somewhat familiar with the HP instrument culture from the 80’s.  At the very least, expect to do a major clean and check over any equipment you acquire.  If you are really serious about some particular piece of equipment, be patient. These things always come up on EBay in cycles. Your needed instrument will come along in a month or two.  There are also some excellent buying guides available on EBay. There is one notable one on spectrum analyzers that worth reading before shopping. Another thing to keep in mind is the parts availability. Sometimes, it’s worth having a second junker clone around to rob for parts. Some decent engineering skills also come in handy. There is a particular precision op amp used in some HP RF devices that was a custom device and no longer manufactured. Still, suitable substitutes can be lashed up from COTS devices.

Here are some pictures of some of my gear: 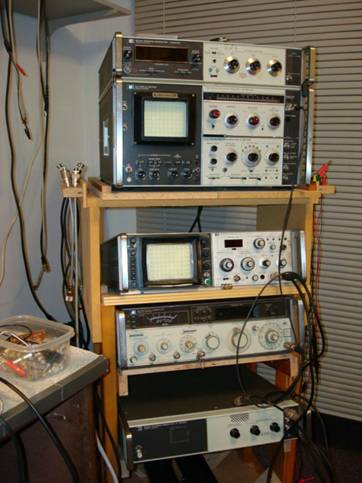 This shaky looking cart holds my spectrum analysers ( A 110 MHZ job, a 1.5 GHz job) and their tracking generators, as well as a precision 1.3 GHz RF generator. The RF generator is the heart of most calibrations and receiver measurements. The tracking generators provide a really slick way to see the transfer function curve of a filter or even an entire receiver.  For making hard copy, I have an XY analog pen plotter that hooks to the analyzers and can draw on graph paper, but I seldom use it. Mostly I just put a digital camera on a tripod in front and take a picture. Photoshop then provides something that can be used in a write up. Both of these analyzers have storage capability through a phosphor retention system. It works fine. 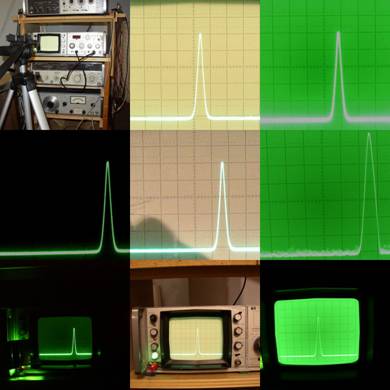 Here are a couple of scopes, a precision audio generator, a sweep generator and another multifunction generator. All of this gear was cheap, required some repair work, and works beautifully. The scopes have 100 to 150 MHz sweep capabilities. Great for HF work. 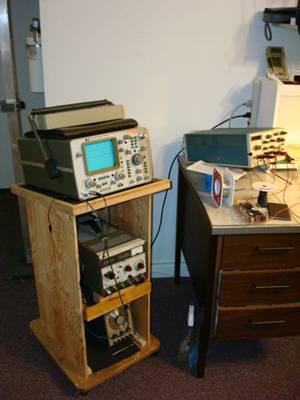 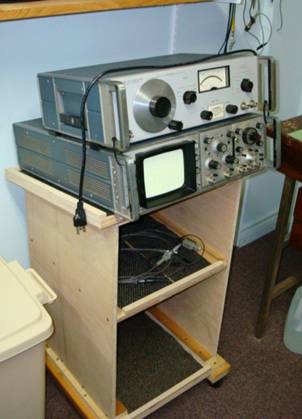 Accessories and Home Made gear

To actually make useful measurements on HF gear, especially receivers, it is essential to be knowledgeable in measurement procedures. There are many places to get information. One of my favourites is EMRFD by Wes Hayword. (Experimental Methods in RF Design). This book is just full of great information on methods and practical examples for all things in receiver and transmitter design for the amateur. I highly recommend it.  (And for pro’s too, for that matter) Most of the ARRL Handbooks also have chapters on measurements and measuring aids.

One of the most useful gadgets is a precision attenuator. Most receiver measurements are total dependent on one of these things. I have a purchased ( New !.. imagine that) MFJ-762 which is accurate up to 170 MHz and can be used to 500 MHz. I also have a home made attenuator based around a salvaged differential attenuator from an old instrument. It is low insertion loss to 10 MHz and has appreciable loss after that. To solve that problem, I added a “” graph to the case, so you know the amount of insertion loss to add at any particular frequency.  This particular unit also has a switch selectable 75 or 50 ohm output.. a handy feature. I also took the opportunity to add a hybrid combiner to the case to allow mixing two sources for IMD and two tone tests of receivers. At least one of these is essential for testing. 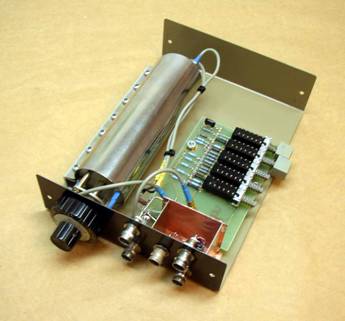 You can see all the BNC connections on the right side of the instrument, which allow the patching in of the combiner, if desired.

The unit on the left is a package of four handy instruments for receiver testing. It includes a pulse modulator to drive the RF generator in pulse mode. This is a “Dit” generator which causes the generator to output bursts of “Dits” which can be tunes to a nearby frequency during testing of receivers AVG and dynamic range. Very handy.

The other gadgets include RF level outputs such as a “Wood pecker” ( an  annoying broad band noise source), a harmonic pulse generator which produces signals every 5 or 10 kHz, and a comb generator output which is used to calibrate the spectrum analyzers. (A comb generator is just a harmonic generator with outputs of some fundamental frequency… 10 MHz in my case. There are outputs every 10 MHz right up to 150 MHz.)

Here is a picture of the “Guts” of this unit. operated to provide good isolation. Dead bug construction, although I used a mill to carve neat traces on the copper board. ’s of 555 timers to provide the functions. And some of the functions can be combined at the same time. ( Say, “Dit” modulator and the 10 KHz harmonic generator.) You can really fill up the receiver pass band with crap quickly with this gadget !  A good torture test.

One of the big advantages of this gadget… it allows consistent repeatability between tests. 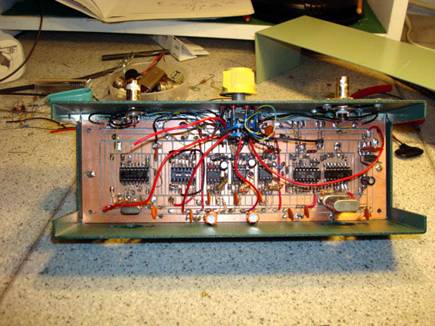 Another pair of very useful gadgets:  A standalone hybrid combiner, and a broadband noise source based on a Zener diode. This is a very useful gadget for filling the receiver passband with noise for filter measurements, S meter calibration, AVG action etc. This is easy to build, and if I had to give up all my test gear except one thing, I would keep this. I am always amazed that more folks don’t have one. I can tell more about a receiver by coupling this thing to the antenna input than almost anything else. Great for trying out gear at a swap meet too, as it is pocket sized. The unit has a chart that shows the kind of out put to expect (S meter readings) at various settings of the attenuator and at various bandwidths. 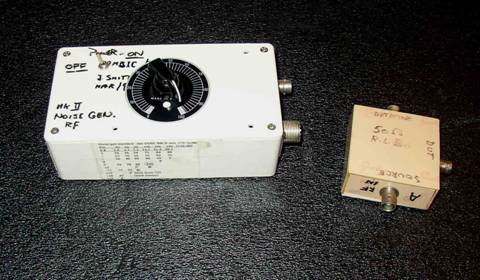 This doesn’t have anything to do with RF testing, but here is a quick look at another portion of my shop. I have machine tools and can also weld nearly anything. Very handy for some of these crazy projects one gets involved with ! 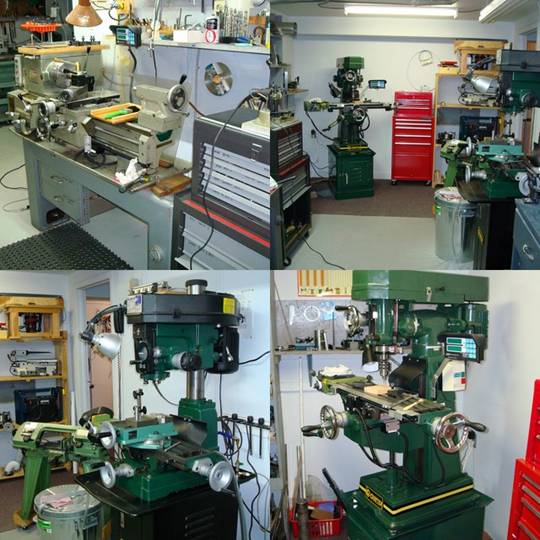 And, last but not least, here I am trying to fix some glitch in the controls of my homebrew amp ! (Even my stuff craps out now and then) 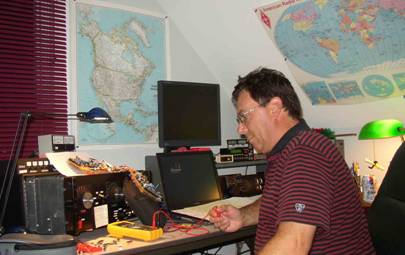