The on the air results of the homebrew short Beverage have been very encouraging on 160, 80, 40 and 30 M.  Gary , VE1RGB and myself have been more than thrilled with the usefulness of these antennas on the low bands.

In my case, I have a puzzling difference in West and East gains ( my antenna runs  approximately West to East.)  Both of our antennas have been built with the “2-Way reversible Beverage” methods, thus we can switch the direction from inside the shack.

I may now have an idea about the reason for the “Imbalance” that I can observe, but first it was important to actually figure out a way to see what the front to back ratio (F/B) of the antenna really is in dB.

How to do these kinds of measurements? Well, In a perfect world, we would have a nice low power and stable RF source to  move around the antenna while a calibrated RF voltmeter ( calibrated receiver or spectrum analyzer) is hooked up to the feed line to make measurements.  That seemed a little beyond my capabilities for a nice afternoon in November. A few local ham stations might work too, but their location would be critical, and it would be nice if they all used the same antenna. Not likely to win that lottery either. 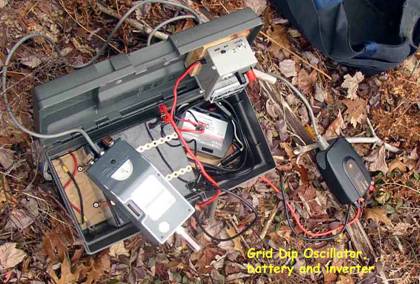 Rummaging around my workshop I rediscovered one of the most useful gadgets I ever found at an (Industrial) flea market: a mint condition Millen Grid Dip Oscillator. Anybody who has one of these little gems will verify that they can be used for dozens of useful ham radio and antenna functions. Today this unit became my portable signal source. Of course, it runs on AC and has a vacuum tube in it. I didn’t have an easy way to run extension cords out to my antenna ends, but I do have a battery and small inverter as an AC power source. This powered up the unit just fine. It had plenty of signal to be easy to find and dominate the receiver pass band.

Next, I recruited my son Zac to aid in measurements. We set up the oscillator on 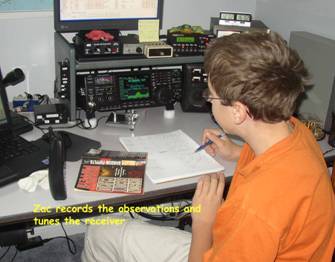 the four bands, one at a time, and carefully recorded the S Meter and preamp readings while the antenna was switched East and West. This provides a crude gain number which when subtracted, provides a F/B ratio.  We used the assumption that the S Meter units were 6 dB each.  (This is of course, the weak point. In my case I do have a reasonably calibrated broad band noise source, and the Pro 3 receiver agrees with the calibration.)

Zac operated the receiver and made notes while I stumped around outside with the gear. We setup and made four band measurements from each end. We used FRS walky-talkies and a cell phone to co-ordinate our efforts and be sure we really were looking at the signal from the grid dip oscillator. The results were encouraging.

The generator was set up at each end of the antenna, within about 10 feet from the ground terminations.

One will notice right away that there appears to be a real difference in ratios between East and West. This is the “Imbalance” I have noted during listening. What’s interesting is that even with this  effect, there is clearly a useful F/B ratio in both directions. I believe the antenna has inherently more gain in the West direction than the East.  Keep in mind that these are non rigorous numbers, but good enough to indicate the antenna is working close to the claims in the literature ( ON4UN’s Low Band Dxing, and the EZNEC models I created to design this antenna.)

There are two reasons I came up with. One reason may be the imperfect transformer matching from my homemade transformers used in the antenna. I have wrestled with this for many hours and get the transformers to pass the prescribed balance tests on the bench, but they still show this Western bias in operation. This isn’t as much of a problem as it might seem. It simply means that I often use the preamp in the East direction. The effect is most pronounced on the 80M band. You will notice that there is an average of 2:1 difference in ratios on all four bands. This tends to make me believe there is still a transformer issue. 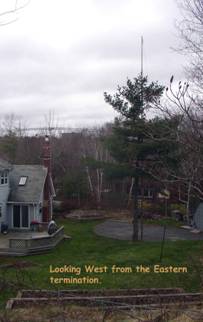 The second issue hit me while we were outside doing the measurements. There is a substantial elevation difference between the East and West ends of the antenna. The difference is approximately 40 feet over 200 feet of antenna. This is about a 12 degree elevation angle towards the East. Is it possible there is an effect from a Beverage being run down a hill like this?

Looking at the EZNEC model, a 12 degree change in elevation doesn’t account for more than a 5 dB difference in gain > If you observed a 5 dB difference each way, it is possible to make the argument that there is up to 10 dB difference in gain from one end to the other because of “Tilt”. So, that may also contribute to the effect. Either way, it will take a little more investigation to solve.  To repeat, it doesn’t alter the usefulness of the antenna to DXing and fox hunting.