A Broadband Preamp for the SWA Nuller

The SWA nulling device has been a big hit in the shack… with one exception. The antenna works great but signal levels are typically down 15 dB or so. This isn’t a big problem, but it entails switching the Pro 3 preamp in and out while trying different antennas. I found this kind of irritating and decided to add a broadband, no tune preamp to the box which would bring the levels back up to normal. If everything worked right, it would be something I could leave on all the time while using the controller.

Here is the circuit reprinted (without permission, but everybody uses the same circuit) from Doug DeMaw’s book:

These transistors are not garden variety, but are widely used in CATV circuits and UHF radios. A scan through DigiKey produced a low priced unit in surface mount only, the KST10 that had suitable characteristics. Many folks recommend the 2N5109, and I did find them at Mouser Electronics. They are favoured because they can deliver an improved IMD and third order intercept. What does that mean ? …..basically fewer occurrences of broadcast stations that occur in strange locations, like the middle of the 160M ham band.

I assembled an experiment to try and work out the KST10 circuit, as I had it on hand first. Since it is a surface mount unit, I just soldered it to a chunk of copper clad PC board as a temporary holder. This worked great.

I elected to use the transmission line transformer method to match the output. (The right hand circuit) The books recommended a 43 mix toroid for the transformer with a u of about 40 or so. This material would be fine, but I had on hand ferrite cores from the construction of the nulling device with a u of about 800 to 1000. I thought they would provide improved low end performance. Having a 43 mix core as well, I made two and tried them both. The ferrite core was far superior and worked fine to beyond 10 MHz. 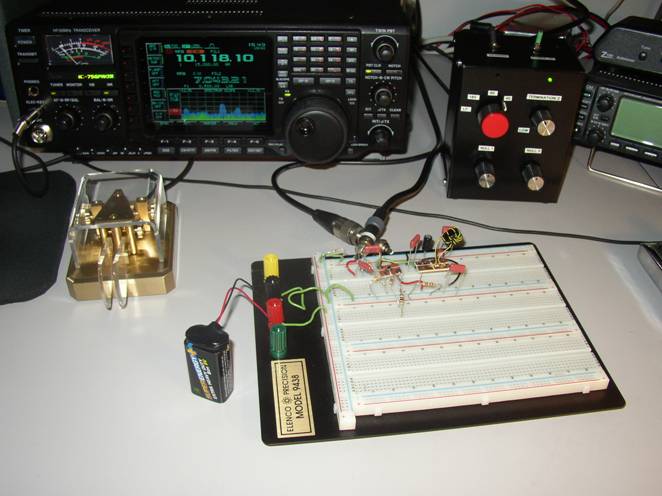 I simply stuck the circuit together on a protoboard, figuring if it worked OK here, it would only improve when I assembled it on a small piece of board and put a shield around it. There is a regulated 12 volt supply inside the nulling box, so power could come from there when installed.

How does it work ?

Just great !  The unit adds about 10 dB to the signal on all bands, including 10 MHZ. This is very handy as the output from my antenna on 10MHz was really low, and almost unusable. It doesn’t overload anywhere, and it makes switching antennas in and out, including the SWA Beverage, a breeze. I found the unit really is linear from 1 MHZ to 10 MHz.

This really finishes the SWA antenna project off nicely and makes the unit a pleasure to operate.

I will make a further report on the finished unit and the trial with the 2n5109 transistor when it arrives.