I finally got around to doing one of several tests for IMDR on my Icom 7700. ( this is the first, I will repeat the test in a few weeks) ’s of folks have asked me about it, and I just recently acquired a second HP8640B rf generator which I was holding out for before making this test. I previously did this with two different generators but having two of these excellent analog generators in the shop made it easier to calibrate the two, rely on their output level calibrations and generally do a better job of the test. On the down side, my IC7700 is two floors above the location of the HP8640’s. All three of these units are comparably sized ( NOT portable !).. so no matter which direction I chose to go, I had to slug gear up and down stairs. One of the advantages of having a teenage son came into play.. Zac could help hump some of these pigs, er, I mean weight challenged equipments, up and down the stairs. In the end, I elected to move the generators to the rig because of the complex connections that would have to be sorted out if I took the rig downstairs.

The goal is to get numbers for the MDS ( minimum discernable signal), the BDR (blocking dynamic range) and the IMDR ( intermodulation distortion response).  Tom Roach W8JI has a pretty good, if somewhat opinionated ( I enjoy opinionated opinions !) on his website. See http://www.w8ji.com/receiver_tests.htm ....  Well worth studying.

The figures of interest for serious  amateurs are the BDR and IMDR for 2 kHz spacing. These are often absent from the manufacturers specs. They are of much interest to Dxers and contesters who operate in crowded band conditions.  ( The IC7700 manual does have a number specified for 100 kHz spacing, but let's face it... that's like comparing strong signals from another planet !) What this means is that we are evaluating how powerful signals inside the receivers passband will compromise the weak signal that we are targeting. The pass band in this case refers to what’s inside the receiver system passband.. not just one stage of IF. The IC7700 has specified  3kHz roofing filters as it’s narrowest set. I never change this as I use CW most of the time, and 3 kHz is still fine for SSB use ( heaven forbid).. hey, I DO have a mic, I just can’t find it most of the time.

As mentioned, I now have two HP8640B’s in good condition. Before use, I checked  output levels on a Tektronix digital scope across a known 50 ohm load to compare the power calibrations. Both were good. Next I check both internal frequency counters against each other, the scope ( a Tektronix TDS 360) and another HP frequency counter. Everybody in agreement to 10 Hz.

Attenuators include  the MFJ unit with 1 dB steps ( a great value for an attenuator, in my mind), and the built in attenuators of the 8640B generators. A hybrid combiner with a 6 dB insertion loss was used to combine the generator outputs.

I have found my best detector is usually a pair of MK 1 ears  coupled to the radio with Bose noise canceling headphones.

The layout looks better than the actual setup. I didn’t actually use all the attenuators shown in the photo. The sketch above is accurate. Detecting consisted of carefully listening for an increase in hiss at the listening point, or the first actual discernable signal tone in the ears. 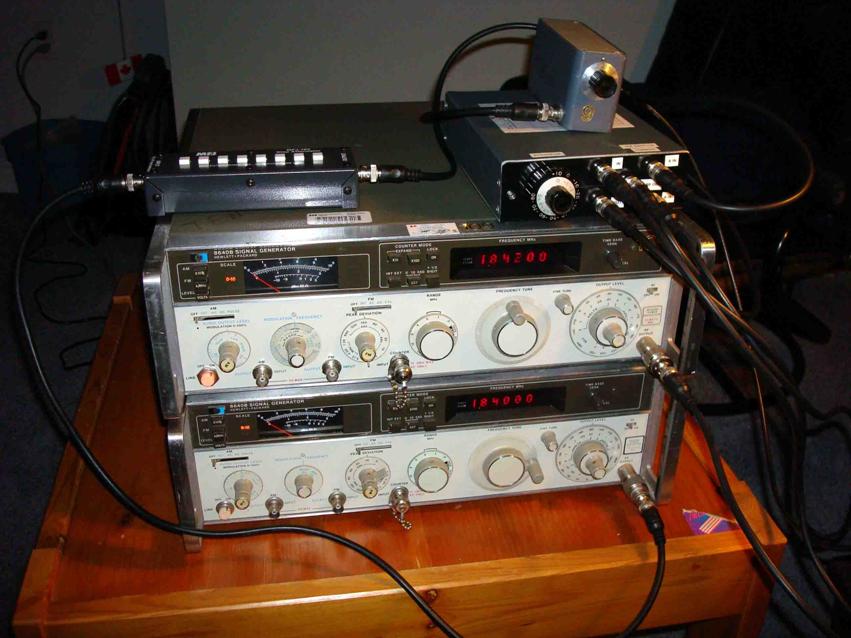 And, here are the results:

I reckon these numbers are OK to about +- 1 dB. I intend on repeating the test in a few weeks to insure I didn’t do anything too stupid the first time around. If the results are different and they well might be, I will provide analysis.

Here is a shot of the rig’s display during the IMDR test… the little blip to the right of the big ones is my ‘signal of interest” which is 2 kHz away from the left hand signals. To the right of this point there isn’t much because we are outside of the rigs 3 kHz pass band. 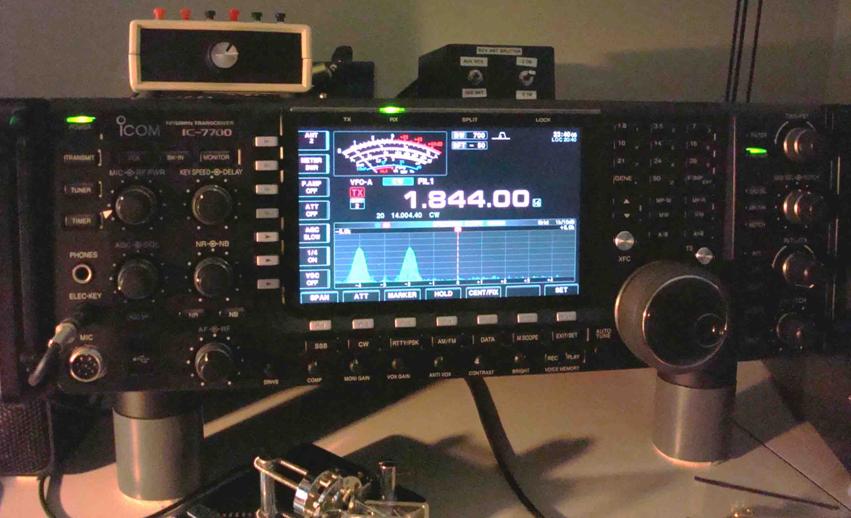 The scope display is at +- 5 kHz spacing and no attenuation. There is a tiny little signal at the marker which I could just detect with the “MK 1 ears”.

So, there is one round of an actual measurement, for good or bad. Actually, I think these are pretty good numbers. I hope it is repeatable.  Note that the 85 dB signals close by are the same as 30 dB over S9… monstrous signals.

BTW, the feet under the rig are custom jobs I made to tilt the front panel up for good contrast. There is another pair underneath for the back feet and the back of the transceiver just clears the desk top.