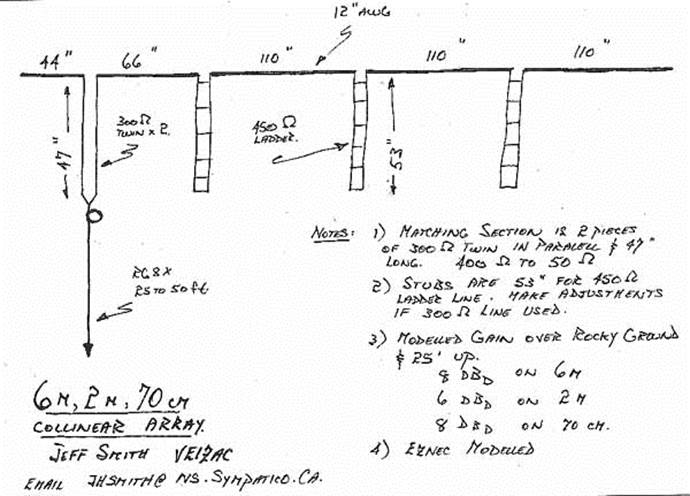 A Quick and Dirty 6M array

Accepting a challenge from VO1NO to get on 6M and participate in the fun of 6M propagation, and wanting to try out a new ICOM 706 all-mode-everything radio, I needed an antenna that could be put together and thrown up quickly, yet provide gain. Everybody I know on 6 M felt a beam of some sort was essential. Along with that comes a tower. Certainly a horizontal antenna is a big advantage on 6 M.

I am known as somewhat of a wire antenna guy, (largely self imposed from neighbour appeasement policies) so the challenge was on to produce an everyman simple antenna. Hmmm… well, lets add the feature that it would be nice to operate on 2 M and 70 cm with this antenna, as well.

How to tackle the project ?

Firing up my trusty copy of EZNEC modeler, I started with a simple dipole. From here on, I used this gain as the reference, so all gain claims are referenced to a dipole, thus dBd. For an element made from 12 AWG wire ( insulated electrical wire) an element length of 110 inches looks good on the model. Also, it allows use on 2M and 70 cm. You can feed this in the center as a dipole, but there is almost no way to avoid having a reactive feed point.. meaning that it would be really difficult to get a good match to coax here. Plus, the reactance would be very height sensitive. Probing around with the model, however, shows a purely resistive point at 40 % from one end. ( 44 inches). This point also stayed nicely resistive through a far wider range of heights, and also at the other two bands of 2 M and 70 cm. Incidentally, the design frequency used was 50.1 mHz. Notice that our dipole is now an OCF, or Off Center Fed dipole.

To skip a step, array elements were added, and then I came back and adjusted the feed point. This feed point impedance shows on the model as 400 ohms R and 0 ohms X… not bad !

To get gain, we need more radiating elements. Radiating elements in line are a form of gain antenna known as a "Collinear Array". By adding extra wire to this antenna in such a way that the wire will radiate our transmitted signal in phase multiples of 360 degrees, we can make a gain array. I added 3 more ¼ wave sections and 3 delay stubs. In other words, the stubs provide a delay so that the wire looks like another set of dipoles, each with a delayed signal on it. We want to have all of our wire elements with a current phase of the signal on it at the same time. We wind up with 4 elements, with each adjacent element having a phase that is 180 degrees delayed from it's 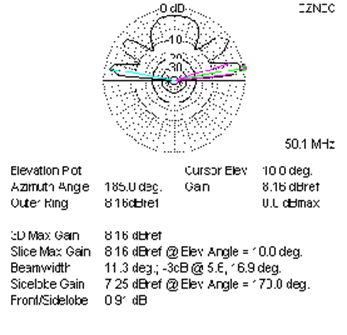 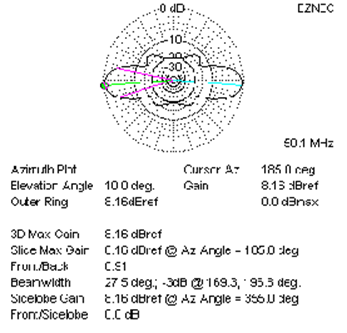 neighbour. In practice, these three elements should really all be tuned specifically to get the right delay, but by doing so, you would only get a theoretical gain increase of ½ dB… to heck with that ! This was supposed to be a simple project ! The three identical elements I have shown added 8 dB to the dipole, or a gain of 8 dBd. Even better, the pattern has nifty lobes that are fairly low take off angle. Here are a couple of views of the modeled radiation patterns in the far field.

These models are for the antenna at 25 feet high, above a rocky ground. The lobes are pointing off the broadside of the antenna, as you would expect from a dipole. The Ref gain is about 4.7 dBi, which is easier to show simply as referenced to a dipole. In effect, this antenna will put out an ERP that is 8 dB better than a dipole. How much is that ? Well, if you can deliver 50 watts to the antenna, the ERP (Effective Radiated Power) broadside to the antenna, and at 10 deg. elevation would be over 300 watts ! Incidentally, EZNEC allows you to view the currents on these elements and see exactly what is happening.

The next step is to figure out how to couple to this antenna with a hunk of coax. The model predicted a 400 ohm resistive feed point. What I need then, is a 400 ohm to 50 ohm transformer to hang up at the feed point. A 8:1 broadband transmission line transformer is a possibility, but you need pretty good core material for 50 mHz to keep losses down, and I also wanted to use this thing at 2M and 70 cm. More importantly, I couldn't find anything suitable in my junk box…

I did have a bunch of 450 ohm ladder line scraps and lots of 300 ohm TV twin lead. Could a quarter wave transformer work ? Well, we want to go from 400 to 50 ohms. We could do that if the quarter wave transformer had a characteristic impedance of square root of 400 times 50. Or, the root of 20000, which is 142 ohms. Hmmm… that is about ½ the characteristic impedance of el cheapo TV twinlead. Two pieces of 300 ohm line, the right length, and hooked in parallel should do the trick. Or be close enough.

Two build this transformer the length of the transformer should be exactly ¼ waves. Calculations showed that to be 59 inches, but that assumed 100% velocity factor. Twinlead is not 100%, of course. It is rated at between .88 and .92, but in practice I have found it is usually lower. Having an antenna analyzer handy allowed me to make the stub exactly the right length for 50.1 MHz. If you have or can borrow an analyzer, cut the stub a little long, and hook it to the analyzer. Then trim it to the right length. Otherwise, you can use these dimensions.

I would love to tell you what that length is, but the antenna is hanging up as I write this article, and I can't remember what the heck it was. It is somewhere between 47 and 48 inches, I think. Two pieces are paralleled to make the transformer. A balun is important for this antenna, so I taped the RG8X I used to connect to this transformer into 5 tight coils of about 6 inch diameter. The whole thing is strain relieved and the connections for all the joints on this antenna were sealed using liberal amounts of hot melt adhesive.

Note, use the amber coloured, high strength adhesive. I usually spray paint all connections with flat black paint after cooling, to provide protection from UV, and improve the view.

You can test this transformer by putting a 400 ohm resistor in place of the antenna, and looking at the base of the transformer. Mine showed 50 ohms and a 1.1 SWR. Perfect ! After attaching the coax, the end of the coax still showed 50 ohms and 1.1 SWR ! (I don't usually get so lucky). I also tried this at 2M and 70 cm, and the same thing held… excellent match. 2M was SWR 1.5, and 70 cm was SWR 1.1. I checked mine again, after the antenna was up in the air, and the match was still excellent.

The next step is to build the phase delay stubs. These can be 300 ohm TV lead, the length being exactly as determined for the quarter wave transformer. Or you can use ladder line, like mine. The ladder line length came out to 53 inches, since it has a higher VF than TV twinlead. I used some plastic scraps to make the connection "T" at the top of the stubs. The bottoms are shorted and left to hang as is. Hot melt and paint everything. My antenna elements are black insulated #12 electrical wire. ( Had some in the junk box) Fat wire has advantages in lowering the Q of the antenna. This makes it a little more broadband than small wire sizes. The whole thing is about 37 feet long.

I have spent 3 evenings working 6 M openings with it. I am very pleased with it ! Everybody I could hear, I could work, and we exchanged similar reports. Most of the hams I worked were using beams. You can draw the conclusion that this is an effective antenna, or, that the antenna isn't important when there is a good opening. Either way, we have something useful with this antenna, because it is so simple to make and put up. Good for portable use too. I haven't tried this antenna much on 2M or 70 cm yet, other than some 2M simplex. The signal reports were good there, as well.

· Computer modeling really helps produce useful results for antenna projects
· Simple wire antennas can rival towers and beams
· A wire antenna can get you on 6M in an afternoon's worth of effort, for little money.
· 6 M is a lot of fun!

If anybody tries this, I would really like to hear how you make out with it.